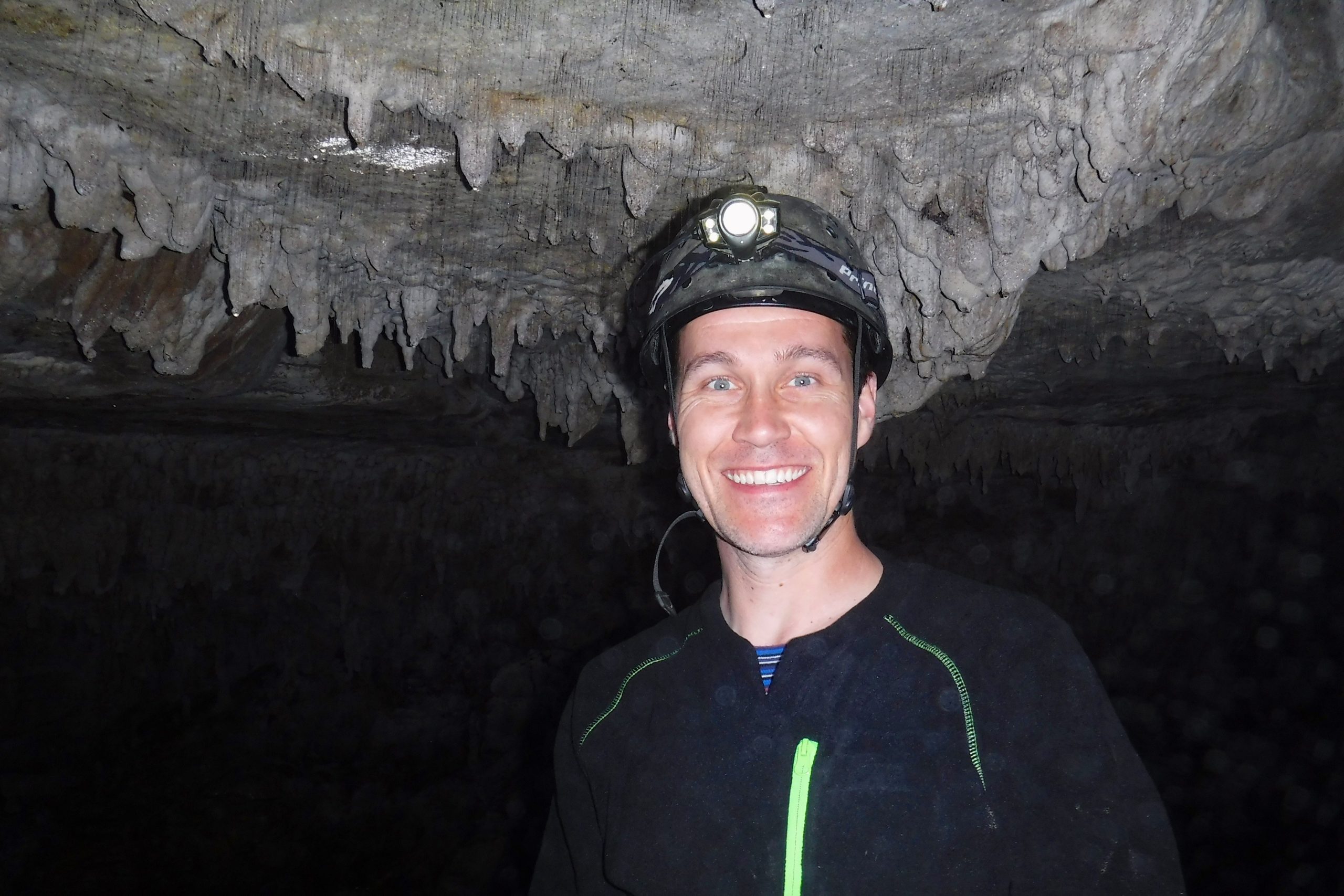 We donned our striped thermals, rubber boots, and helmets and tramped down a muddy hillside to the entrance to Mangarongapu Cave. If we wanted to see glowworms in their natural environment, we were going to have to work for it. Most bioluminescent organisms live in the sea, particularly in the deep. On land, bioluminescent species include glowworms, a catch-all term that refers to luminescent insects like fireflies (winged beetles) and the fungus gnat of New Zealand, among others.

New Zealand’s unique glowworm is called Arachnocampa luminosa, and it’s usually found in dark, damp places, like wet caves. Despite being called glowworms, these animals aren’t true worms; they’re a type of fly! Arachnocampa luminosa produces light as a larva, pupa, and adult—that’s three of the four stages that make up its life cycle—but it shines brightest during the larval stage.

Arachnocampa luminosa spends most of its life as a larva. After hatching from an egg, an Arachnocampa luminosa larva spins dozens of threads of mucus-y silk, forming a sticky and deadly trap. The threads hang from the ceiling of a cave, and these tiny predators’ blue-green glow attracts prey, such as other insects and spiders, into their lairs.

Bioluminescence refers to an organism’s ability to produce light without creating heat. In the case of glowworms like Arachnocampa luminosa, a chemical reaction creates the “living light” my husband Josh and I had traveled so far underground to see.

To reach the dark places glowworms prefer, we followed our guide deep into the impressive cave system beneath his family’s land. We waded through the gushing river that carved the caves, we climbed vertically up rocky shafts, and we shimmied through some incredibly tight spaces. Several times along the way, we stood still and simply looked up.

In places where the ceiling was low, we could see the glowworms’ silky, mucus-y threads up close, just inches from our faces. When we came to large cavernous openings, we would pick a spot to rest, turn off our headlamps, and let our eyes adjust to the darkness. Glowworms lit the ceiling of the cave like a starry night’s sky. We sat in silence, gazing at the river of lights that flowed hundreds of feet above us for as far as the eye could see.

Several hours later, we emerged from the cave system sore, soaking wet, a bit scraped up, and muddy beyond belief. Photos of the glowworms in the dark would have required gear we did not have with us, but seeing such a stunning display of bioluminescence in person was one of our favorite wildlife-viewing adventures yet. What’s one of yours?

(If you’re ever in New Zealand and want to have this experience too, we recommend the folks at Glowing Adventures as guides!)