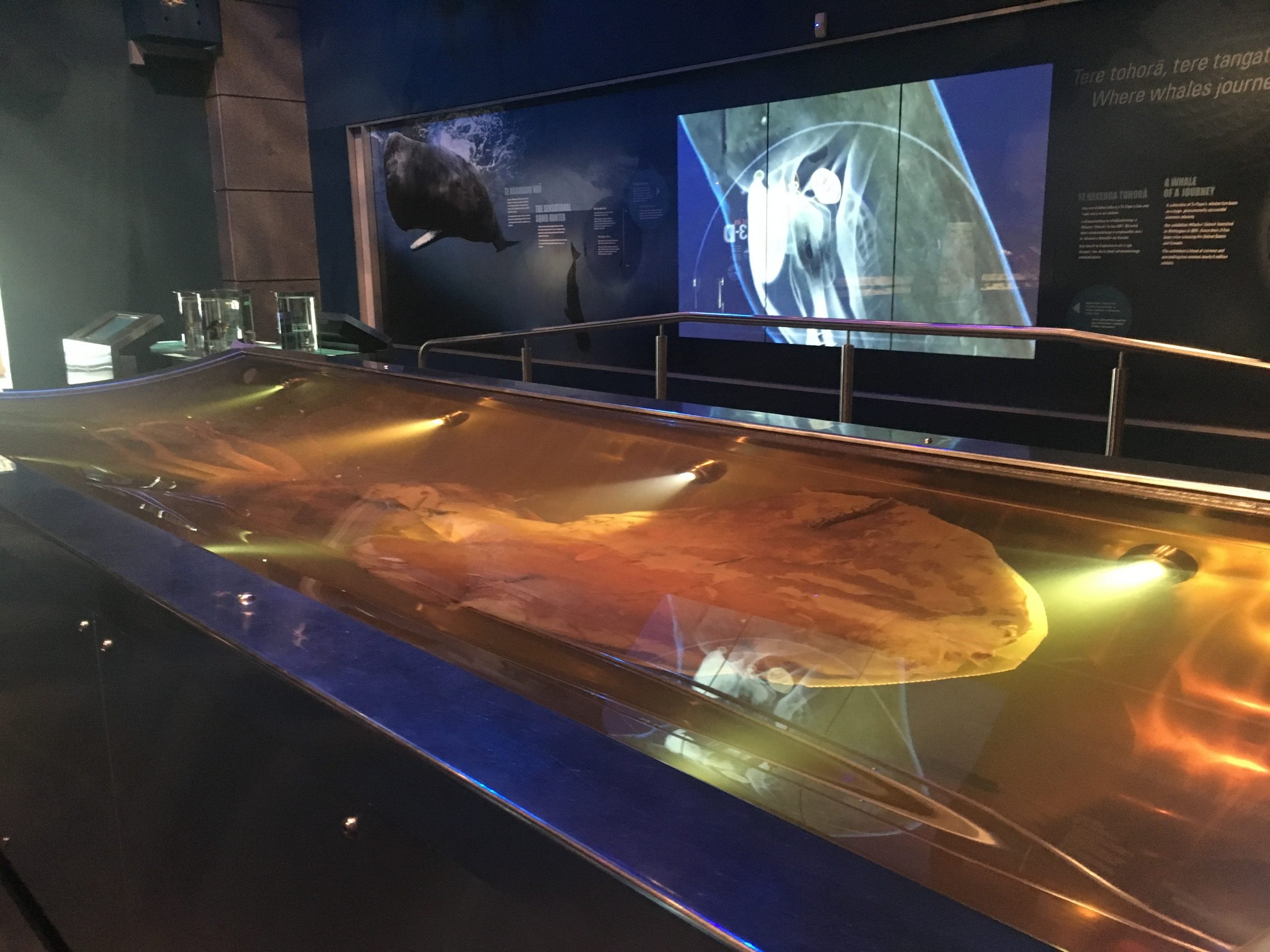 Ten years ago, the crew of the San Aspiring fishing vessel, which was on the hunt for Antarctic toothfish, pulled in a longline and discovered they had caught something unexpected. It was a huge, red blob—a deep-sea-dwelling colossal squid (Mesonychoteuthis hamiltoni) that had also been hunting for toothfish more than a mile below the surface. Recognizing they had something unique on their hands, the crew hauled the now-deceased squid onboard and froze its body.

Once the squid’s body was delivered to scientists on land, the team decided not to dissect it. It remains the only intact colossal squid specimen in the world, and it’s on display at the Te Papa Museum in Wellington, New Zealand. The squid continues to attract crowds of scientists and visitors, including us. We recently visited Te Papa to get a look at this scientific wonder, which has a cameo in our upcoming book Marine Science for Kids, and to meet with Bruce Roberts, a Te Papa Host known as “The Squid Guy.”

It took a team of world-class scientists six months to figure out how best to thaw the squid’s body after it arrived at Te Papa. Once thawed, scientists had to figure out how to preserve and store the delicate squid. Because Wellington gets frequent earthquakes, liquid preservatives that can be explosive were not an option for the public display.

Instead, the team decided to preserve and store the colossal squid in propylene glycol, a colorless, syrupy liquid derived from natural gas. A dairy tank maker helped the museum design the special casing for the squid’s massive body, which weighs about 495 kilograms (more than 1,000 pounds) and no longer retains any skin. The glycol within the tank is changed out once a year and tested for contamination.

Since its capture, the squid’s eight arms and two tentacles have shrunk to a fraction of their original length. The specimen now measures about 4.2 meters (about 14 feet) long. However, while cellular breakdown of the squid’s tissues continues to be inevitable, the squid remains remarkably well preserved. For instance, Te Papa visitors can still get a great look at the squid’s two club-shaped tentacles with rows of sharp, rotating hooks—each hook being about two times the size of a cat’s claws.

Like other squids, a colossal squid has three hearts, a beak (shaped like an upside-down parrot’s beak), an ink sac, and blue, copper-based blood. But perhaps the most impressive feature of all are its eyes, which are the size of soccer balls!

With thousands of hooks surrounding the suction cups on its arms, a colossal squid is a formidable predator in the deep. But the hunter is also the hunted. A colossal squid’s main predator is most likely sperm whales, deep-diving toothed whales that use echolocation to find food, such as giant and colossal squids, in the depths.

This amazing discovery has helped the scientific community make several educated guesses about how colossal squids live and behave in the deep. However, there are still many mysteries to be solved about these formidable creatures. If we know so little about something so large, what else don’t we know about the ocean and the life that depends on it? It’s an intriguing—and exciting—thought.